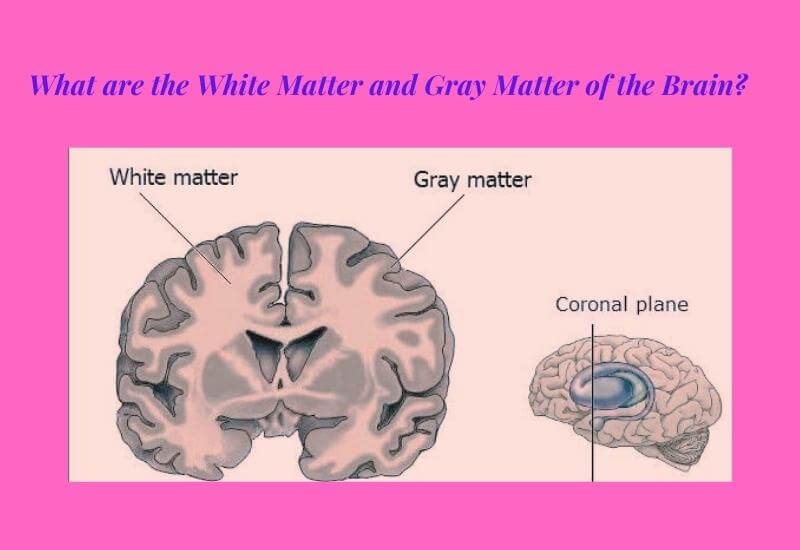 What are the White matter and Gray Matter of the Brain?
Spread the knowledge by sharing

Hope you all are good.

We have an amazing topic right now. What Are the White Matter and Gray Matter of the Brain?

In the human body, the brain plays a very important role. Accept it! We cannot survive without our brains.

The brain is comprised of two main parts: white and gray matter. White matter is made of the bundles of axons that connect neurons with one another, whereas gray matter is made up of the nerve cells themselves. So, let’s get started.

What Are the White Matter and Gray Matter of the Brain?

This is the brain’s communication network. It connects different parts of the brain to each other and allows them to work together. It has a supportive role in the brain. It helps to connect different parts of the brain together and provides insulation for these connections. It also contains metabolic pathways that help to keep neurons fueled with energy, despite being furthest from sources of nutrients and oxygen

This is the brain’s “thinking” part. It contains nerve cells that carry information from one area of the body to another. Gray matter consists mainly of neurons, which are cells specialized in processing information. Neurons are found in a variety of shapes and sizes but are typically covered by dendrites (branches) extending off them like tree limbs outstretched towards other neurons or other receptors on their surface or those on other cells.

The branching ends of a neuron’s dendrites have tiny fibers called axons, which transmit neural signals to other neurons via synapses.

This type of matter refers to a bundle that has axons connecting various parts of both sides of the brain, which facilitates communication between neurons on each side.

Gray Matter on the other hand is made up entirely of neurons (nerve cells). It refers to any part or region within someone’s brain where these neuron cells are located and it’s found mainly on one side or both sides of a person’s cerebrum (outer layer).

Dendrites, unmyelinated axons, and glia make up the neuropil.

Location of the White Part

As was already mentioned, this is arranged into axonal tracts. In the deeper parts of the cerebrum and cerebellum, white matter predominates; grey matter covers the white part. This part of the core contains other gray matter components, such as the basal ganglia. The white matter contains the fluid-filled ventricles of the brain.

Location of the Gray Part

The cerebrum, brain stem, and cerebellum are rich in neuronal cell bodies. This latter structure, which contains more neurons than the rest of the brain combined, takes up only 10% of the total brain volume.

This is a type of brain tissue that helps to coordinate thoughts and actions.

Diseases of white part can occur in different parts of the brain. Some are caused by trauma, some are genetic, and some are caused by viruses. These diseases can change a person’s personality and ability to perform everyday tasks.

White matter diseases can cause:

– Inability to remember or comprehend what happened moments ago

The disease of gray matter mainly affects the frontal lobe, which is the part of the brain responsible for thinking, planning, judging, and decision-making.

There are many diseases that affect our brains and their functions. The disease of gray matter is one such brain disease. It gets its name from the color of the brain tissue that has been affected. This disease mainly affects the frontal lobe, which is responsible for thinking, planning, judgment, and decision-making skills. If these diseases are not treated properly, the mind will not remain calm. Our sleep is also affected by these diseases, and people feel angry in the morning. If you want to read about Why I am so angry in the morning, read this

White matter is the brain’s connection wiring, which is made up primarily of axons that pass messages between different regions.

Gray matter is the brain’s computation circuitry, which contains neurons and synapses that create and process information.

The white part makes up the majority of the brain’s connective tissue and comprises most of its volume in humans. Gray matter consists mostly of neurons or nerve cells

Does Long Hair Cause Headaches? How to Minimize it

Why Is It Hard to Sleep Without Your Partner?

What Do Your Eyes Do When You Sleep?

We use cookies on our website to give you the most relevant experience by remembering your preferences and repeat visits. By clicking “Accept All”, you consent to the use of ALL the cookies. However, you may visit "Cookie Settings" to provide a controlled consent.
Cookie SettingsAccept All
Manage consent

This website uses cookies to improve your experience while you navigate through the website. Out of these, the cookies that are categorized as necessary are stored on your browser as they are essential for the working of basic functionalities of the website. We also use third-party cookies that help us analyze and understand how you use this website. These cookies will be stored in your browser only with your consent. You also have the option to opt-out of these cookies. But opting out of some of these cookies may affect your browsing experience.
Necessary Always Enabled
Necessary cookies are absolutely essential for the website to function properly. These cookies ensure basic functionalities and security features of the website, anonymously.
Functional
Functional cookies help to perform certain functionalities like sharing the content of the website on social media platforms, collect feedbacks, and other third-party features.
Performance
Performance cookies are used to understand and analyze the key performance indexes of the website which helps in delivering a better user experience for the visitors.
Analytics
Analytical cookies are used to understand how visitors interact with the website. These cookies help provide information on metrics the number of visitors, bounce rate, traffic source, etc.
Advertisement
Advertisement cookies are used to provide visitors with relevant ads and marketing campaigns. These cookies track visitors across websites and collect information to provide customized ads.
Others
Other uncategorized cookies are those that are being analyzed and have not been classified into a category as yet.
SAVE & ACCEPT